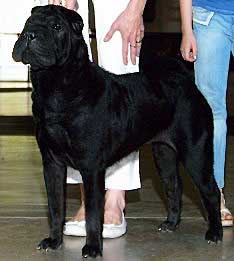 Nikki finished her AKC championship at 13 months, starting out with a 5 pt. major owner/handled.
Dam to BISS GCH Stella, BISS CH. Twinkle and BISS GCH Ally.
Nikki will be 9 years old (Feb. 2015) and is a retired couch potato. 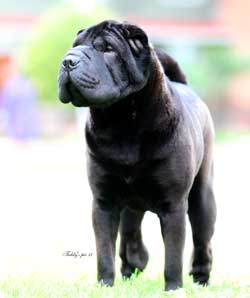 Stella finished her AKC championship at SEVEN months old with three majors, out of the bred-by exhibitor class. At 10 months old, she won an AOM at the CSPCA National Specialty (Pat Hastings), and finished her Grand Champion at 1 year old. We are very proud of her and will continue showing her selectively as she matures. Twinkle, her litter sister, is also a BISS winner.
Dam to CH. Brekkukots Big Shoes To Fill & CH. Brekkukots Coco Chanel Xu-Fei. 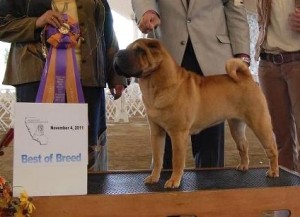 Twinkle started out with a bang winning two 5 point majors her first weekend out, and topping the year off with a BISS win.
Twinkle is co-owned with Mrs. Roberta Lombardi. 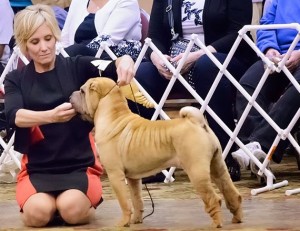 Ally is a once in a lifetime dog…..beautiful, showy horsecoat out of Eno and Nikki.
Ally finished her Championship at the CSPCA National Specialty, winning Best of Winners at the Regional, Best of Winners at the National and Best Puppy In Sweepstakes.
2015 #1 Chinese Shar-Pei Breed Standings, Eukanuba BOB winner, and an all-breed BIS.

2016 Ally and Clint Livingston ended the year as #1 All Breed CSP and #2 Non Sporting dog. Ally currently holds the record for most Bests In show for a Chinese Shar-Pei at 24 and counting! National Specialty winner, 2016.
Co-owned with Jeff Mauk & Simone Demirjian Beazly.

BISS CH. Brekkukots As Luck Would Have It (Lailah) 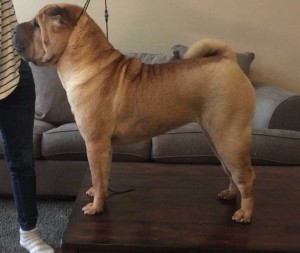 She finished her AKC championship in three shows, with 5 pt majors from the bred by class. She’s also a Best In Specialty show winner, from the classes!